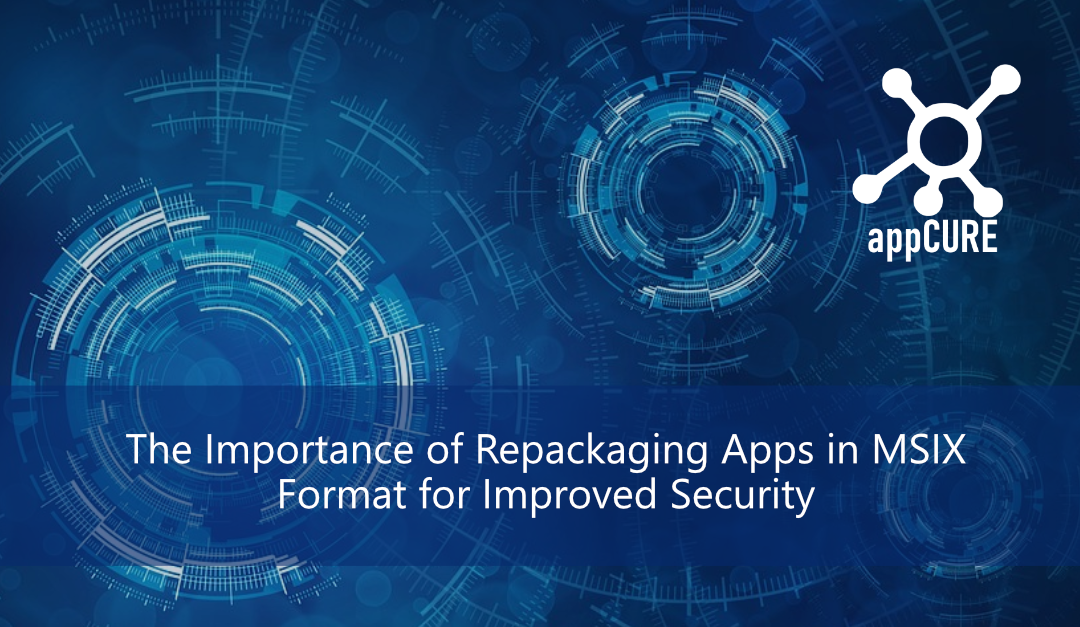 The Importance of Repackaging Apps in MSIX Format for Improved Security

In today’s digital landscape, security is a top concern for businesses of all sizes. The rise of remote work and the increasing use of cloud-based apps has made it even more critical to protect sensitive information. One effective way to improve the security of business apps is to repackage them in the MSIX format.

MSIX is a modern application package format that provides a secure and reliable way to install, update, and manage applications on Windows 10, 11 devices and Windows Server 2022. This format has several benefits over traditional installation methods, including:

Simplified deployment: MSIX apps can be easily deployed and managed through the Microsoft Store for Business and enterprise delivery technologies like Microsoft Intune, VMware Workspace One and AppVentiX, which eliminate the need for manual installations and reduce the risk of configuration errors.

Additionally, migrating to MSIX enables dynamic application delivery (MSIX app attach), allowing enterprises to deploy and manage applications centrally to the users who need each specific app without installing every app on the master image. Businesses can use the likes of Azure Virtual Desktop, AppVentiX, Nerdio, VMware App Volumes and Parallels RAS to deliver applications in the MSIX app attach format to users.

Streamlined updates: MSIX apps can be updated automatically through the Microsoft Store for Business and other supported MSIX enterprise app management solutions, ensuring that users have the latest version of the app with the latest security updates and bug fixes.

Sandboxing: The MSIX format also provides a sandboxing capability, which isolates the app from the underlying operating system (container), reducing the risk of malware infections and other security threats. The sandbox container provides limited access to system resources, including read access to the global file and registry of the device. This helps to prevent the app from making unauthorized changes to the system or accessing sensitive information. MSIX images (MSIX app attach) mount to the virtual desktop as read-only, which further helps tighten the grip on security.

Code signing Certificates: code signing certificates with MSIX packages are a mandatory requirement to enable installation. This can add a level of trust to the apps you use, which is important in the context of enterprise app deployment. The certificate helps to verify the authenticity of the MSIX package and that it has not been altered or infected by malware. This provides extra protection for sensitive information and reduces the risk of security breaches. Additionally, code-signing certificates can help ensure compliance with industry standards and regulations. This can provide peace of mind for businesses and their customers, as they know that the applications they are using are secure and trustworthy.

Legacy apps: Legacy applications can pose a significant security risk as they may not have been updated to address the latest security threats. By packaging legacy apps into MSIX format, organizations can ensure that they have a secure, containerized version of the application. Sealing is a term we use at appCURE for packaging old applications into an MSIX. Sealing an application into the MSIX package means the application will not change and will not receive future updates. Sealing into an MSIX reduces the risk of security vulnerabilities. MSIX helps businesses meet industry security standards and reduces the risk of security breaches, even when faced with legacy applications that need to be maintained for archival or other reasons during modernization projects.

In conclusion, repackaging business apps in MSIX format provides numerous security benefits and helps businesses stay ahead of potential security threats. By using MSIX, companies can simplify their application deployment and management while ensuring their sensitive information is protected and aligned with industry standards such as Cyber Essentials. It’s time to make the switch to MSIX and take control of your app security today. 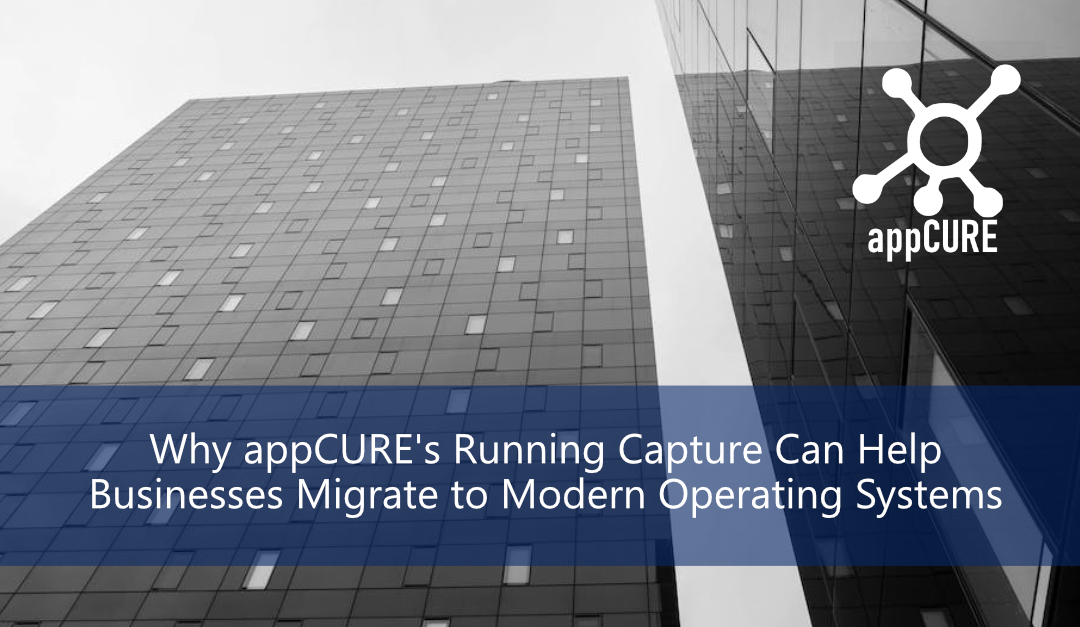 The world of technology is constantly evolving, and businesses must keep up with the latest advancements to remain competitive, operational and secure. As technology advances, the speed at which new versions of Operating systems have increased. This also means that the deprecation of older versions is much quicker, reducing the lifetime in which an organisation would remain on a specific operating system version.

One of the major changes in recent years is the move to modern operating systems, such as Windows 10, from older systems like Windows 7. However, migrating to a new operating system can be a daunting task for businesses, especially when preserving existing software and configurations. This is where appCURE’s Running Capture technology comes in.

appCURE’s Running Capture allows businesses to easily capture current system information, applications and configurations, enabling you to migrate to a new operating system. This eliminates the need to manually reinstall applications and reconfigure settings, saving businesses both time and resources.

appCURE offers both MSI and MSIX packaging formats for transformed packages, allowing businesses to choose the format that best fits their needs and environment. The MSI format is a tried and tested format that has been around for many years, while the MSIX format is a newer, more modern format that offers additional benefits, such as improved security, compatibility, and distribution. By offering both formats, appCURE enables businesses to choose the format that best meets their needs, whether they want the reliability and stability of MSI or the benefits of MSIX.

In addition to streamlining the migration process, Running Capture also helps businesses minimize downtime and avoid any potential loss of data or productivity. By capturing only the required inflexion points of each specific application, businesses can be sure that components and settings will be migrated, ensuring a smooth transition to the new operating system.

Another key benefit of Running Capture is that it supports both physical, virtual and cloud environments, making it a versatile solution for businesses of all sizes. Whether you are running a single server or multiple virtual machines, Running Capture can help you quickly and efficiently migrate to a modern operating system.

Finally, appCURE’s Running Capture technology is designed to be IT admin-friendly, allowing all technical users to manage the migration process easily. With a simple and intuitive interface, businesses can quickly and easily migrate to a new operating system with minimal disruption to their daily operations.

In summary, appCURE’s Running Capture technology helps businesses migrate to modern operating systems such as Windows 10, 11 and Server 2022. The technology captures current system information, applications, and configurations, enabling a smooth migration without manual reinstallation and reconfiguration, saving time and resources. appCURE offers MSI and MSIX packaging format outputs supporting physical, virtual, and cloud environments. The solution is IT admin-friendly with a simple interface and minimizes downtime, ensuring a smooth transition to the new operating system. Migrating to a new operating system has never been easier, thanks to appCURE’s Running Capture technology. 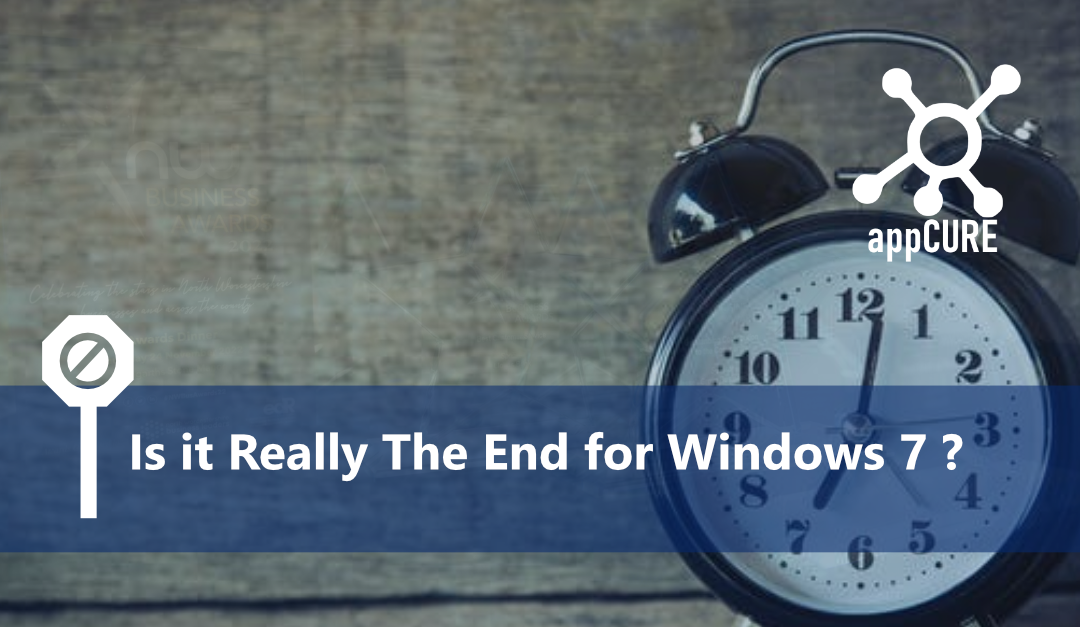 Is it really the End for Windows 7

The technology industry has seen significant advances over the past decade and is unlikely to slow down anytime soon. As a result, older versions of software and operating systems become deprecated as new versions emerge. The term for deprecated software/operating systems is also known as “end of life (EOL)”.

Its inevitable software and operating systems will become end-of-life as software vendors naturally strive for innovation, improvements and enhancements.

The requirement to upgrade or migrate an operating system is not a new concept; however, this can and does impact organisations differently. Many technology professionals can attest to good and bad experiences in relation to migrating from older systems to modern; however, the same patterns and problems can occur each time a migration is required.

As you may or not know, Windows 7, Windows 8.1, Windows Server 2008 and 2008 R2 are End of life as of 10th of January 2023. Many organisations are still stuck on out-of-support / end-of-life operating systems. The good news is, there are ways and means to migrate and move to a supported operating system.

According to statcounter,  Windows 7 accounted for 11.2% of all windows installations by December 2022. However, this is not an accurate picture as off-network/air-gapped devices are not included. Microsoft Suggests that there are over 1.4 billion Windows 10 and 11 devices out in the wild. This suggests that there are over 204,680,000+ Windows 7 and Windows 8.1 devices in use today. 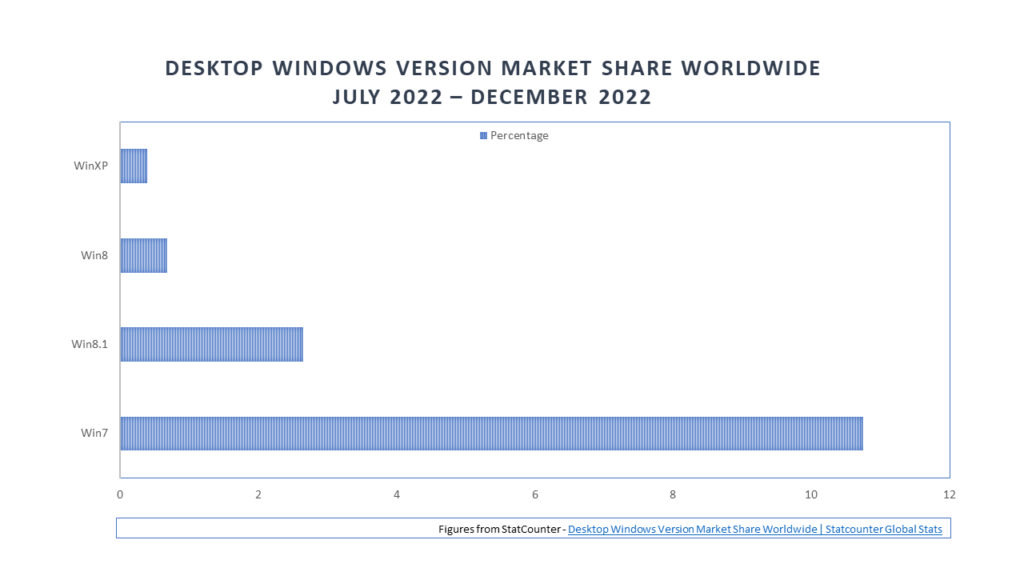 It is clear there is a significant number of devices running out of support operating systems globally. One could argue that it is somewhat understandable that organisations are reluctant to migrate due to the pain points associated with applications and the risks of production systems failing to operate on a modern operating system. You can read more about addressing the challenges of legacy applications here.

Here are five example questions to help you plan for an Operating system migration project:

The above questions posed are commonly not asked in most organisations, and a lot of the issues regarding hardware compatibility, lost installation media and others become apparent during the migration project, inevitably causing lengthy delays.

Decoupling applications from the hardware offers improved flexibility and choice of target platform. This also enables more flexibility when it comes to addressing older application challenges that may not have been available or considered previously.

Microsoft has a much faster approach in terms of handling Windows 10 and 11 updates than previous operating system versions, and it’s doubtful there will be any slowdown anytime soon. This means organisations are subject to more technological change over a shortened period, which can create challenges for larger organisations with strict regulations, policies and processes. Organisations may also not realise the impact and strain on the IT Department due to the more frequent demand to migrate due to the faster depreciation of operating system versions.

It is important to fully understand your environment, starting with what could be described as stock control, what applications are in use, and where are the installation media, hardware, and documentation. Furthermore, having expensive systems like a CNC machine or an MRI scanner that cannot function can significantly impact the organisation. IT must carry out packaging and system configuration documentation to assist with migrating to new and replacement hardware/operating systems.

There is a common theme in the industry concerning the lack of or limited documentation, installation media, or licencing information.

A good question to ask: what can you do to address the migration challenges related to lack of application documentation, missing installation media and application compatibility?

appCURE was formed specifically to address these challenges and problems that commonly occur when attempting to migrate to a modern operating system. One of the key benefits appCURE offers is the ability to capture, repackage and migrate an application within 6-8 minutes (per-app); this enables organisations to migrate applications faster, reduce overall project time, and unstick those stalled projects.

Long-term migration projects should be considered a thing of the past.

Get in touch if your applications are stuck on an operating system, or you are experiencing a project stall due to applications, or you want to understand what you can do with your applications in a modern workspace environment,  appCURE and its partners can help.